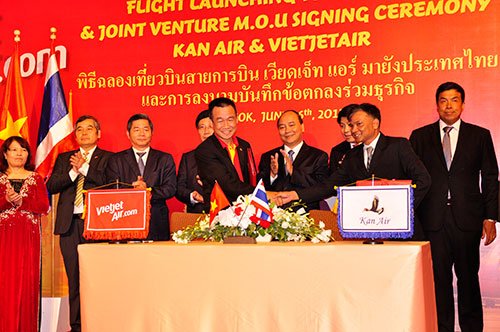 VietJet Aviation Joint Stock Co. has clinched a memorandum of understanding with young carrier Kan Air to establish an airline joint venture in Thailand, as part of the Vietnamese carrier’s strategy to expand its operations in Asia.

VietJetAir, as the local carrier is shortly known, and Kan Air struck their deal and unveiled the plan to form Thai VietJetAir in Thailand’s capital city of Bangkok on Wednesday. As planned, VietJetAir will own 49% of this airline joint venture, whose registered capital is approximately US$6.5 million.

VietJetAir told the Daily that the no-frills Thai VietJetAir was expected to conduct both domestic and international flights from Suvarnabhumi Airport early next year, with two to three Airbus A320 planes in the initial time. This is the aircraft type that VietJetAir uses for its flights within Vietnam and from Vietnam to Thailand.

Desmond Lin, business development director of VietJetAir, said in a statement that through the joint venture, VietJetAir wanted to offer more opportunities for travelers, especially those in Vietnam to explore new experiences in Thailand, Singapore, Taiwan, South Korea and other Destinations in Asia.

Somphong Sooksanguan, president of Kan Air, said in the statement obtained by the Daily that many Thai young people had known about the new name VietJetAir in this market and they were impressed by the services that VietJetAir had provided them.

“This is an advantage and fundamental for us to believe that Thai VietJetAir will be welcome and supported by Thai travelers,” Somphong said. “We have experienced the flights of VietJetAir and appreciate the services that it offers.”

VietJetAir launched daily service between HCMC and Bangkok in February and opened the Hanoi-Bangkok route in June this year.

Vietnam’s Deputy Prime Minister Nguyen Xuan Phuc told the MOU signing ceremony that VietJetAir had contributed to not only development of the country’s aviation market but also increasing travel and trade links between Vietnam and Thailand.

VietJetAir took off in December 2011. Currently, this second largest airline in Vietnam after Vietnam Airlines operates eight Airbus A320 aircraft to perform more than 400 domestic and international flights a week, with daily service from HCMC and Hanoi to Suvarnabhumi Airport. In Vietnam, the carrier has flights that connect 11 major airports across Vietnam.

VietJetAir has envisaged in its development strategy to become an airline group. To realize this ambitious target, the company will expand its flight network and aircraft fleet, with the number of planes expected to reach 10 all Airbus A320s this year.