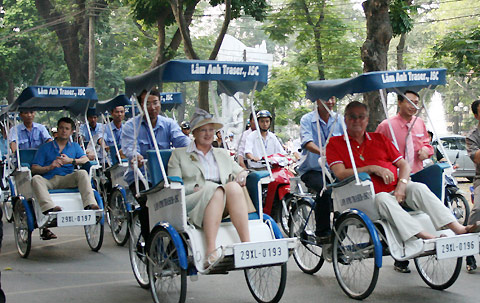 Hanoi’s Department of Culture, Sports and Tourism said on June 27 that it will actively improve the tourist environment in the capital in the coming time.

The department made the pledge at a June 27 meeting on measures to implement its tasks in the last six months of the year.

Recently, there are many complaints about environmental hygiene, vendors’ harassing and overcharging tourists in the city, making negative impacts on the capital’s tourism. The ancient quarter, the area around Hoan Kiem Lake, Literature Temple, and the route surrounding West Lake are “hot” spots.

The department said a tourist support centre will be set up at No. 47 Hang Dau Street in the ancient quarter in July to provide tourists with necessary information and deal with complaints from tourists.

Besides, the department will accelerate inspection of tourist service providers in the city, aimed at finding wrongdoings and have measures to resolve.

Since the beginning of the year, around 8.33 million visitors have come to Hanoi, up 9 percent against the same period last year, including 1.03 million international guests, up 15 percent. The numbers of tourists from Japan, the Republic of Korea , the US , France and Australia saw the strongest rises.
At the meeting, Deputy Director General of Vietnam National Tourism Administration Nguyen Manh Cuong handed over to the department a certificate recognising Hanoi as one of the 25 most favourite Destinations in Asia. The destinations were selected by readers of the world’s biggest travel website TripAdvisor.